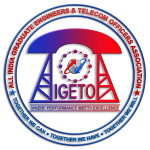 AIGETOA Team met PGM Pers on 16.08.2021 and discussed the DPC aspect of left out JTOs in telecom wing. With reconciliation of vacancies, he informed that the vacancies have been rechecked and things have been found in order. However AIGETOA insisted that there is definite mismatch in calculation and same needs to be rechecked. Further, as per the request of AIGETOA during meeting with CMD BSNL and PGM Pers earlier, roster preparation for calendar year 2019 has also been initiated, so that further DPC can happen. We requested for updating the roster for calendar year 2020 also. The notification process for LDCE is also under process and the same is expected shortly. We also requested for expediting the DPCs for JTO to SDE in electrical and civil wing. PGM Pers assured for the early completion. In Civil wing certain issues are there with respect to vacancy calculation, which is being looked into.

As far as the promotion in SDE (T) to AGM and AO to CAO is concerned, it was again reiterated that the promotion can not be executed due to pendency of SLP in Hon’ble Supreme Court and necessary remedial action for including all eligible/time bound functional upgradation to next grade is being discussed with Director HR and CMD BSNL. In the meantime the association is also exploring legal solution for the logjam in view of the SLP.